Operating in more than 140 countries, Europcar offers mobility solutions to five million customers worldwide using its fleet of 248,000 vehicles. It is one of the biggest names in the private rental vehicle market and requires grade-A procurement to compete at such a high level.

Head of Europcar’s UK Procurement Dean Edwards recognised that the company’s print service was fulfilled
by several suppliers across the business. The marketing, procurement and operational teams had previously attempted to consolidate suppliers but were unable to do so. Europcar engaged ERA to see if this could be done. There was also a driver to change one of their suppliers as they had recently been acquired by a larger company and service levels were slipping.

Download the full case study to explore how ERA was able to find a solution to Europcar's issues and deliver substantial savings. 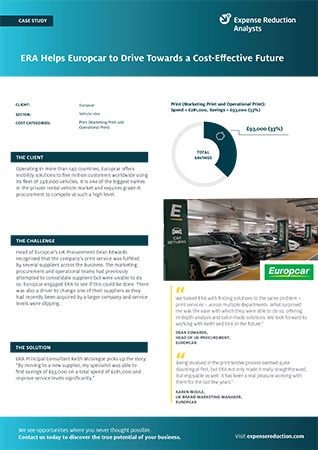