Hill House School is an independent day school for girls and boys aged 3-18 years, with approximately 750 pupils and 80 staff. Founded in Doncaster as a preparatory school for boys, it became fully co-educational in the 1980’s. In 2012-2013 Hill House School was named Independent School of the Year by the Times, having also won the Outstanding Strategic Initiative Award. This recognised the outstanding success of the school in moving to its current site and remarkable growth of the school, including significantly improved examination results, and provision in music, sport and drama.

Hill House School had used the same incumbent supplier for many years, and whilst this had been a successful partnership, Hill House School decided that as contracts were due to expire and with an already aging fleet, that it was an ideal time to ‘test the marketplace’.

Download the full case study today and learn more about exactly how Expense Reduction Analysts were able to help Hill House School including the specific areas of cost savings that were achieved.

Explore the full case study and discover why Hill House School chose to "test the marketplace" and how Expense Reduction Analysts were able to deliver sustainable cost savings. 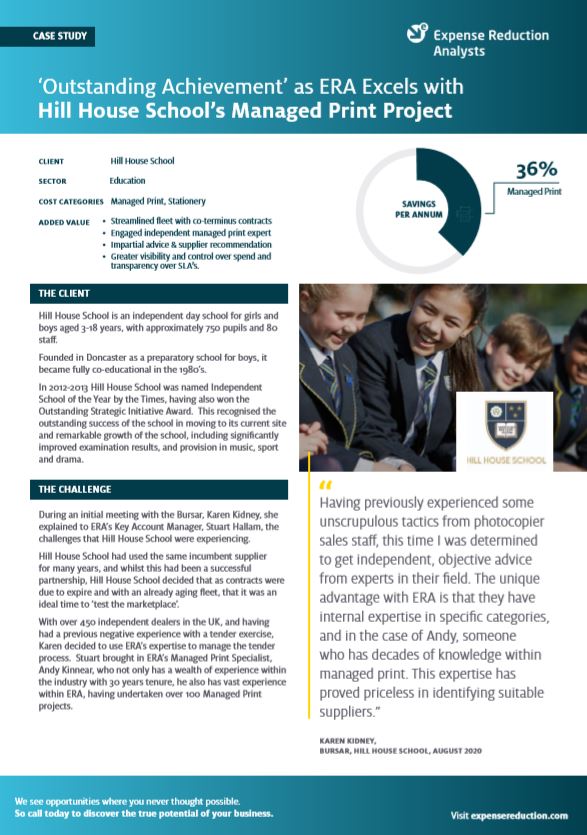 "Having previously experienced some unscrupulous tactics from photocopier sales staff, this time I was determined to get independent, objective advice from experts in their field. The unique advantage with ERA is that they have internal expertise in specific categories, and in the case of Andy, someone who has decades of knowledge within managed print. This expertise has proved priceless in identifying suitable suppliers."