Home > Industry Solutions > Retail Solutions > A Storm is on the Horizon for Retail: What Can You Do About It?

There is a storm brewing. One that threatens to squeeze our beloved high streets during their crucial period of recovery.

Previously, we’ve written extensively about the changing landscape of retail. That landscape was evolving steadily as consumers adopted new ways of shopping and prioritised companies that displayed positive sustainability credentials.

The gradual uptake of online sales, proportional to physical ones, was accelerated by the pandemic. During this period, shops closed their doors, and consumers avoided contact with anyone outside their own households.

It was a turbulent time, to say the least.

But as the world entered 2022 and the final restrictions were lifted – following a successful vaccination programme – Europe looked as if it could finally begin the long path to recovery.

Today, the picture is not so optimistic. People’s money simply won’t go as far as it did three years ago.

As that crisis takes hold, retailers are going to feel the pinch. It’s a pinch that will be made worse in the UK by the return to full business rates. Following the government’s announcement to temporarily sideline them, these rates have increased over the last two years, giving businesses enough time to adjust to increased costs. For many, however, the lifeline is being withdrawn too early.

Collectively, these problems have created the perfect storm for the retail sector. CFOs and CPOs are, perhaps for the first time in a long time, analysing their company spending and reevaluating costs. So, which cost areas of your business could be optimised to ensure your retail business isn’t left out in the rain?

Expense Reduction Analysts is happy to suggest a few.

In our 30 years, we've seen the retail industry change dramatically. Behavioural shifts, influenced by the arrival of cutting-edge technology, have required businesses to adapt. And adapt fast. With a host of challenges on the horizon - such as increased costs and a fall in footfall - Expense Reduction Analysts can help you to rise to the occasion and meet the issues head-on. Don't just window shop. Download our latest insights to see how we can help you. 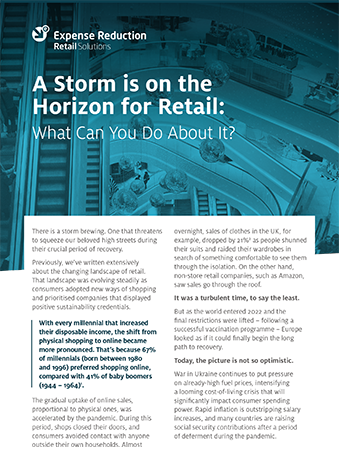 A Storm is on the Horizon for Retail: What Can You Do About It?
Click Here to Download

"With every millennial that increased their disposable income, the shift from physical shopping to online became more pronounced. That's because 67% of millennials (born between 1980 and 1996) preferred shopping online, compared with41% of baby boomers (1944 - 1964)1."

This is a huge cost category within the retail sector. It covers everything from your banking and investment service to your corporate tax advice. Perhaps the premiums you pay on your building insurance have been steadily creeping up, or you’d like to reassess how you’ve been banking.

Our specialists find this to be an area often blighted by poor procurement practices and suffering from a lack of attention.

When it comes to fleet management, companies often – understandably – just look at the upfront cost of vehicle purchase. Perhaps they match this against the retail price, but they make a fairly simple comparison. This cost category is often in the top three spends for a company, so it’s vital you get it right.

Each year, the EU produces approximately 80 million tonnes of plastic packaging waste and 88 million tonnes of food waste1. A high percentage of those figures is disposed of by the retail sector. It is a costly exercise and one that, if we stand any hope of reducing our environmental impact, needs to change.

Retail and wholesale firms can have a long tail of fragmented expenditure across services such as property maintenance, cleaning, security and washroom services.

In 2021, for the first time since records began, the number of retail job vacancies rose above one million. Across all areas of the sector, companies are finding it hard to recruit long-term staff and are instead filling the gap with temporary positions, which can be expensive.

The euro in the pocket of your consumer is being squeezed. it’s going to be squeezed much more before the storm of 2022 passes. With a reduced spending power, more and more often they will have to choose between a retail purchase and a meal out. In short, there is going to be enhanced competition between the retail and hospitality sectors.

Discover more about how ERA can help your business and the value we can deliver.