Top Factors and Challenges in the Energy Market for June 2019

Energy prices fell during May as warmer summer temperatures and an increase in the supply of gas from Norway left the gas system oversupplied. The Kollsnes processing plant and the Troll gas field both returned to service following annual maintenance, increasing pipeline imports to the UK through the Langeled pipeline.

The ramping up of the “trade war” between the US and China has dented global confidence and demand for oil is down. President Trump’s threat of tariffs on Mexico has also added to concerns as Mexico is a major supplier of crude oil. Meanwhile US crude inventories increased by nearly 5.0 million barrels at the end of May strongly supported by increasing US shale production.

The UK saw two straight weeks of zero coal use in power generation; a new record and a growing trend as coal powered generating plants are gradually phased out. This trend is also being witnessed across Europe and weaker demand for coal in China has resulted in prices falling to $64.75/tonne at month end.

The potential of a “no deal” Brexit appears to have increased after the results of the European elections and Mrs May’s pledge to stand down on 7th June. This has resulted in a weaker Pound Sterling.

There are a wide variety of factors taking place throughout June which are having a significant impact on the energy market and in turn, your energy costs. Download our full energy market report for June to explore all of the factors in detail, to learn how best to protect your business. 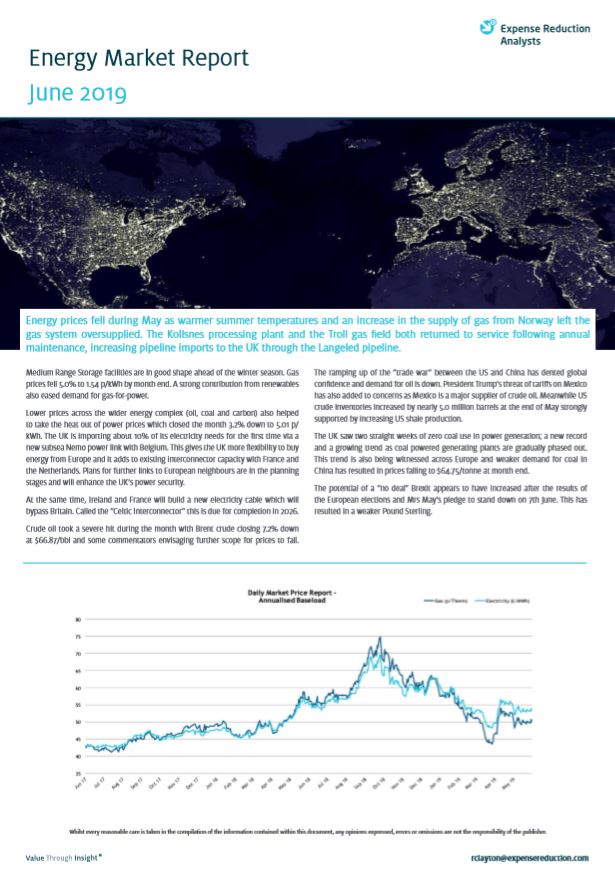 Interested in learning more about how Expense Reduction Analysts can help you optimise and manage your energy costs in an increasingly volatile market? Contact us today and we can discuss exactly how we can help you and explore the opportunities available.