There has been a lot of talk, media obsession and editorial about Brexit over the last few years. For much of that time it was just a speck in the distance that was getting closer, but didn’t seem to be a problem because everybody thought common sense would prevail and all parties would emerge with some miraculous compromise that would make everybody happy – or at least mutually unhappy in a small way.

Now that speck in the distance is looming larger by the day – in fact we have only 93 days left at the date of writing before we must exit, barring revocation, delay or an improbable deal in a short space of time. Over this time there has been much doom and gloom, speculation and concern. However, some industries and areas of spend are more susceptible than others to Brexit and its effects and we need to consider the facts rather than the speculation. One such fact is that Brexit has had and continues to influence the UK exchange rate against the Euro and the US Dollar.

The Impact of Brexit on Exchange Rates

This is particularly relevant because most hardware and software is sourced from either the USA or the Far East and traded in either of the above currencies before arriving in the UK. Consequently prices in the UK are affected by changes in rates and IT suppliers are notoriously jittery because it can have a considerable effect on their profits, leading in turn to their earnings per share (EPS) forecasted and delivered to Wall Street, which will then ultimately affects their share price. The picture of exchange rates is very ominous. The chart to the right shows the rates since 1990 – practically the last 30 years. As the reader can see, there have been highs and lows before, with the previous lowest point being around £1:$1.20 in 2017, also due to Brexit. Prior to that, the dollar rate has almost always hovered above £1:$1.40. 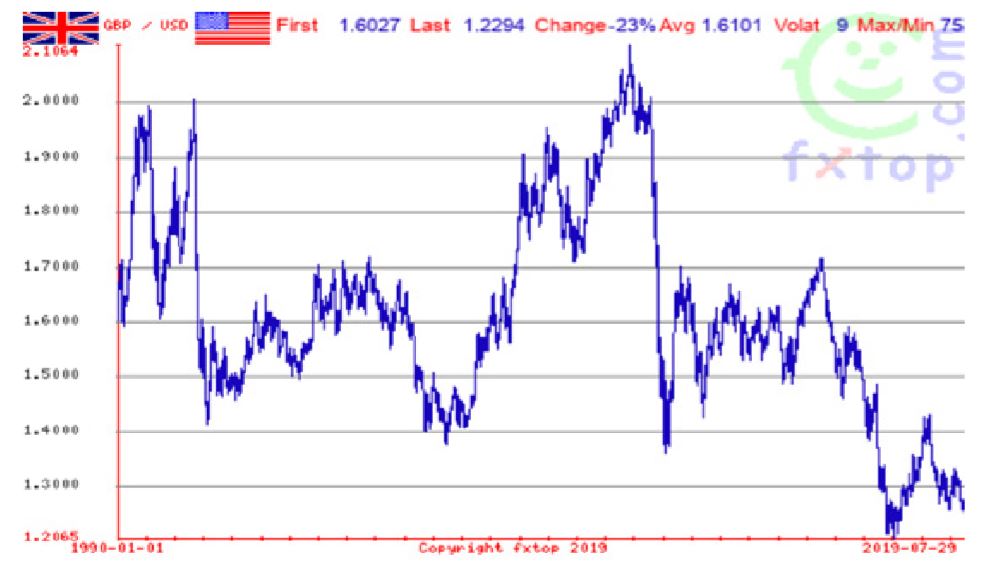 How will this impact IT costs?

So, we now face the very real possibility that transatlantic rates will reach parity, as Euro rates already have. This is not a situation that the suppliers of hardware and software will be able to tolerate, especially the larger ones. Given the above, clients are entitled to expect unpleasant price rises. We have seen single instance rises of between 5% and 22% in the last two years alone and those same suppliers are almost certain to do the same again. For clients who can predict their spend over at least the next 12 months and ideally further forward, we can help to protect against these and other potential rises in that time – bearing in mind that Brexit may have an effect on other trading conditions (for example tariffs, import duty, cost of sale and project delivery) which are all also likely to increase IT costs.

IT has become a must-have for many clients, enabling their organisation not only to operate efficiently but to actually survive, so simply deferring or cancelling planned IT investment may not be desirable – or even possible. We can protect that investment, by assessing the risk and impact of price rises to clients and locking in favourable pricing quickly and beneficially. However, there are only 93 days – and clients MUST act now if they want to avoid this risk by contacting their ERA Client Account Manager or IT Specialist.

About the Author: Simon Atkinson, Simon has an extensive career in the Information Technology market, spanning over a quarter of a century. Initially in technical roles, then rising through a variety of commercial to senior management positions, covering both UK and international remits, across EMEA (Europe, Middle East & Africa) to India and the Far East. Learn More